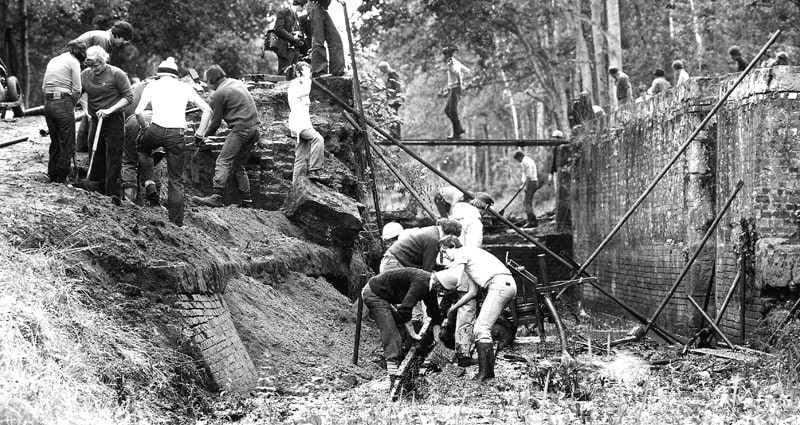 The first plans for the development of the Basingstoke Canal were drawn up in 1776, as a means to transport agricultural produce from central Hampshire. Approved by an Act of Parliament in 1778, the construction contract was awarded to one John Pinkerton, however work was delayed for 9 years because the war of American Independence drained the country of financial resources. The Canal was finally opened in 1794 and has had mixed fortunes ever since, not least tunnel collapses, bankruptcies, falling demand and constant limited water supply.  Read about the history of the canal up to the point the Canal Society came on the scene.

Following a lengthy campaign for public ownership and restoration, the Society set to work in 1976 to bring the canal back to life. Had the volunteers known then how much work was involved and how long it would take, they may have never taken the job on. The work involved rebuilding 29 locks, construction of 110 lock gates, and dredging and clearance of an estimated quarter of a million tonnes of mud. The team also had to restore a steam dredger, lay half a mile of track (twice) and run a railway service. The Canal was finally opened in 1993 to much public acclaim, having taken 18 years to complete. Read the story of the truly monumental project to restore the Basingstoke.

Today, the Canal is a navigation for boaters, a haven for wildlife (it is an SSSI), an amenity for recreation and well-being, and a heritage asset. It has been described by some visitors as one of the most attractive canals in the country.  It is run by the Basingstoke Canal Authority (BCA), using public money from the Surrey and Hampshire county councils and from the 7 riparian local councils along its 32-mile restored length. As a result, it faces financial pressures and the counties have been looking for opportunities to relinquish ownership (an attempt to transfer the Canal to the Canal & River Trust was recently unsuccessful). The Society works with the BCA to make the most of opportunities to promote the Canal with its owners, users and the general public.

The Last 5 miles of the Canal into Basingstoke, apart from that between the collapsed Greywell Tunnel to Penny Bridge which Hampshire CC retained as a nature reserve, largely remained in private hands and could not be restored. Remnants of the Canal can be seen along this section, but it has been largely built over or dug up. While returning the Canal as a navigation back into Basingstoke is beset with insuperable difficulties, it remains the Society’s aspiration to re-establish the route of this lost section as close as possible with a footpath and cycleway.

History of the Canal
Restoration
The Canal Today