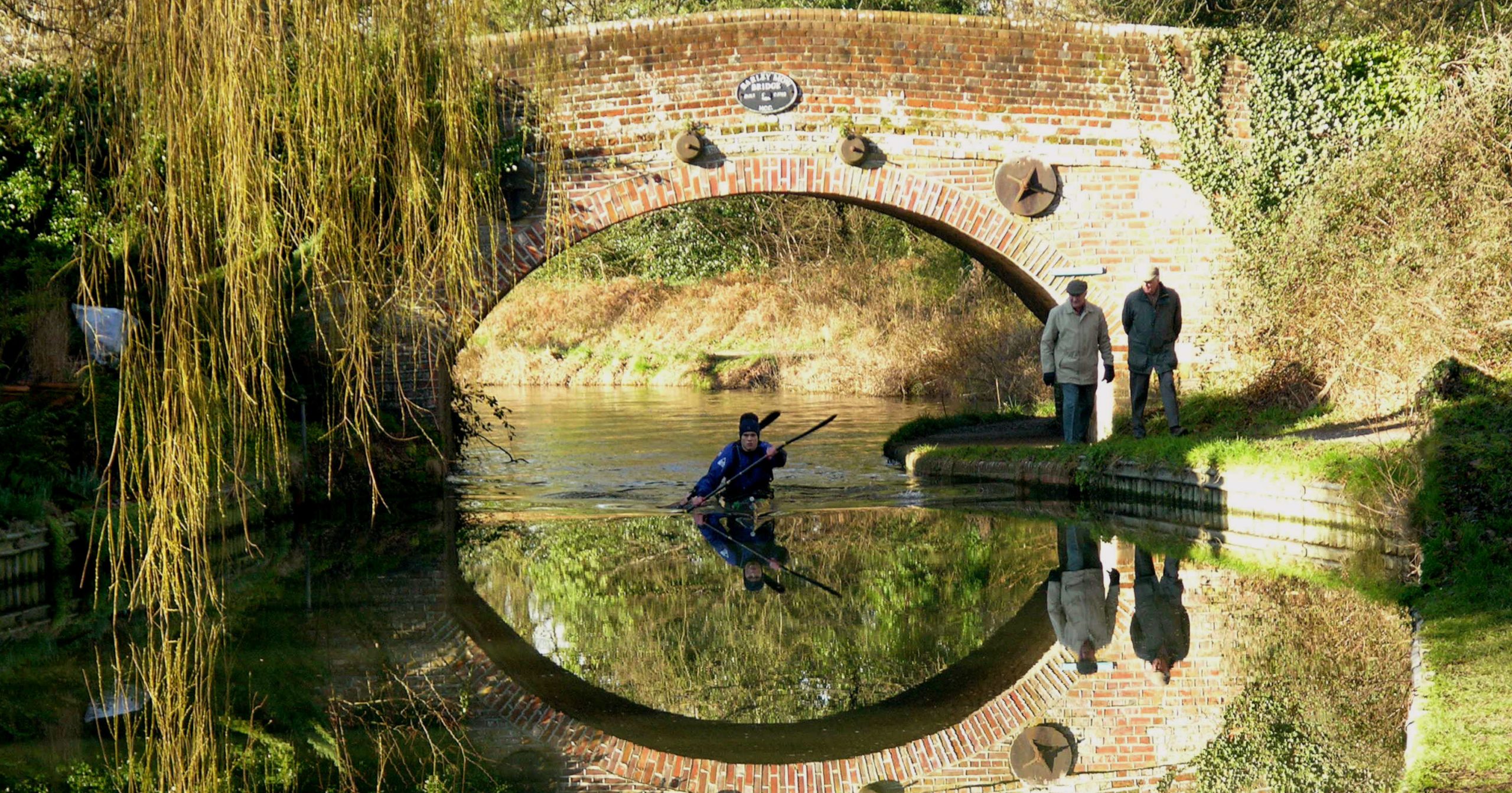 A beautiful amenity for all, but funding, management and water supply challenges

Today, the canal is a lovely stretch of water, towpaths and parks, winding its way for 32 miles through Hampshire and Surrey. It is enjoyed by thousands throughout the year, participating in a wide range of leisure pursuits – walks with the family and friends, kayaking and canoeing, fishing, jogging, cycling, photography and much more.

Water supply permitting, the canal also welcomes visiting narrow boats from all over the country. Reviews of visitors trips are almost invariably positive – plaudits include: “it’s worth the effort to discover a beautiful and interesting waterway”; and “the most beautiful canal in the UK”.

Not only is it a recreational amenity, the canal is also a notable wildlife habitat. The alkaline water from the chalk springs at Greywell and the acid water content eastward where the canal passes through heathland, has given rise to one of the largest varieties of aquatic plants and invertebrates along the length of a single UK waterway. As many as 25 of Britain’s 39 species of dragonflies and damselflies inhabit the canal. Recognising the unique ecological importance of the canal, English Nature (now Natural England) designated the entire waterway, except for a 4 mile length through Woking, as a Site of Special Scientific Interest (SSSI) in 1995.

Strategic management of the canal is provided by the Joint Management Committee (JMC in the above diagram), which has representatives from the two County Council owners (SCC/HCC), the seven riparian (neighbouring) Borough, District and Town Councils (Partner LAs), the Basingstoke Canal Society (BCS), Natural England, the Environment Agency (EA) and other stakeholders, including residential boat owners, angling and canoe clubs, and commercial operations. Day-to-day operational management is in the hands of the Basingstoke Canal Authority (BCA), based at the Canal Centre in Mytchett.

The BCA derives income from boat trips and boat hire, licences for visiting boats, anglers and other enterprises, but the majority of its funding comes from the County and neighbouring Councils, with a significant monetary and in-kind contribution from the Society. The local authorities are not under a legal obligation to pay their contribution and some have not done so in full for some years, which has contributed to ongoing financial pressure on the BCA.

Luckily, following a funding and management review in 2006, the Joint Management Committee agreed to abandon any further consideration of closing the Canal to navigation, which at one stage seemed a distinct threat. The Counties also committed to a multi-million pound programme of work aimed at returning the Canal to a fully safe and usable condition, and the Deepcut flight was finally reopened in April 2013 after over 4 years of closure resulting from a maintenance backlog.

However, pressures on council funding have made it increasingly difficult to meet financial commitments to the canal, and so the Counties have looked to alternative funding and management models. Lengthy negotiations took place with the Canal and River Trust (C&RT) with a view to transferring the canal’s ownership to the national waterways body, but unfortunately these were concluded without result in 2018.

Apart from lack of funding, the Canal’s other major problem is lack of water. It has never had a summit pound reservoir or river supply, but has relied mainly on springs at Greywell. This means that the amount of water feeding the Basingstoke is a very small fraction of that available to neighbouring waterways. Increased levels of water abstraction together with climate change have meant that use of the locks has had to be suspended for large parts of the summer in most years since the re-opening. This has obviously discouraged boaters from visiting the canal. The Canal Society has been instrumental in installing back-pumping schemes to enable the locks to keep working in dry periods.

The first of these schemes took water from below Lock 1 and pumped it up a pipeline below the towpath to discharge into the Woking pound. The project was largely funded by the Heritage Lottery Fund and built by contractors, but volunteers also played a significant part. It was completed in 2001. Five years later, volunteers did all the work installing a second scheme to back-pump the St.John’s flight, with funding mostly from the Canal Society and the IWA.

Studies continue to be carried out to determine how to enhance the water supply to the Deepcut and Brookwood flights of locks. The Society has also run a project to allow remote monitoring of water levels and is looking at other ways to better manage limited water supplies.