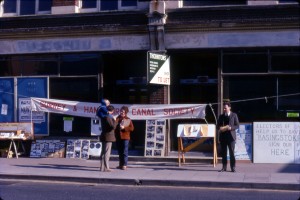 By the early 1960s, the Basingstoke Canal was still in private ownership and semi-derelict. In 1966 a letter was published in local newspapers by a resident of Brookwood named Jim Woolgar, enquiring whether anyone else was interested in trying to do something about the canal. Half a dozen people responded and decided to form the Surrey and Hampshire Canal Society. A campaign was started for the Canal to be taken into public ownership and restored to navigation. The Society held public meetings and collected more than 10,000 signatures to a petition handed to the Surrey and Hampshire County Councils. 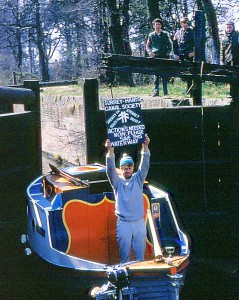 In July 1967 the New Basingstoke Canal Company (then the Canal owners) submitted proposals to fill in urban lengths of the canal for redevelopment, leaving isolated rural lengths for amenity use. The Canal Society organised a protest cruise to Lock 1 where founder member Robert Harris hung a sign  ‘Amenity or eyesore? Beauty or decay? Action’s needed now. Please save this waterway.’

In September 1968 the Canal Society published its own plans for the Canal in a booklet “The Basingstoke Canal – The Case for Restoration”, edited by Dieter Jebens. This attracted widespread local and even national media coverage.

However, the condition of the Canal continued to decline and in September 1968 after a prolonged period of heavy rain, two bank breaches occurred. One was where the canal passed round the Farnborough airfield and led to it being flooded on the eve of the opening of the famous air show. The breach was finally sealed by using an old aircraft fuselage to bridge the gap that was then infilled with clay and earth.

Serious as this was, the second breach was worse for the canal. An oak tree, that should not have been allowed to grow there, blew over on the Ash Embankment, leaving a hole through which most of the top pound in Surrey from Aldershot to Deepcut drained. The Canal Company’s response was to build a dam across Ash Lock thereby cutting off the lower reaches from their main supply of water.

Action was clearly needed and the County Councils finally agreed to buy the Canal on the promise of volunteer labour for its restoration. Purchase negotiations between the County Councils and the Canal owner broke down in April 1972 and the Councils decided to seek Compulsory Purchase Orders which were confirmed in February 1975, but at the CPO Public Inquiry in November 1973 it was announced that the Canal owners had agreed to transfer the Hampshire section of the Canal from the border to the Greywell Tunnel to the County Council. About 1½ miles of recognisable canal west of the tunnel remained The New Basingstoke Canal Company property, but beyond this the bed had largely been filled in and the opening of the M3 motorway in 1971 destroyed about half a mile of the canal line at Hatch. No planning objection had been raised because of the threat of an abandonment order on the whole, then derelict, canal. 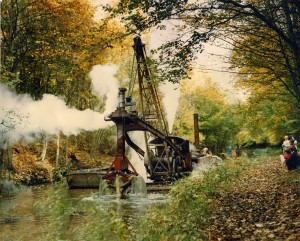 1974 was an eventful year. Hampshire County Council gave the go-ahead for restoration and the Canal Society wasted no time in organising bankside working parties, with the first clearing the towpath at Barley Mow Bridge.  By the end of the year volunteers had cleared the 15 miles of Hampshire towpath and repaired two culverts and the aqueduct over the River Whitewater in North Warnborough. David Gerry, the original chairman of the Canal Society was appointed as the Canal Manager in Hampshire with 5 men under him. Robin Higgs was elected chairman in his place, and was the Society’s driving force throughout the Canal restoration.

The Society had also discovered a steam-powered dredger, belonging to the Kennet and Avon Canal Trust, sitting idle in Reading. The Trust agreed to sell it to the Canal Society at scrap value and after having its boiler re-tubed, the machine was transported to Odiham, reassembled and was in steam to demonstrate its practicality to the County Council by the end of the year. The aptly named Perseverance subsequently dredged the whole length from North Warnborough to the eastern side of Fleet, ending its work on the Canal in 1993. 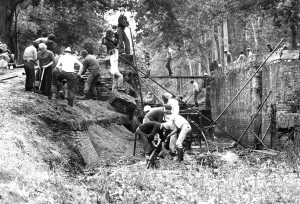 Surrey County Council finally purchased their half of the Canal by CPO in March 1976. In September 1977, the Canal Society and the Waterway Recovery Group organised the ‘Deepcut Dig’. This week-long national working party was based on the Brookwood and Deepcut flights of locks and attracted some 600 volunteers. The photo below shows work on Lock 16.

In addition to the work on the canal, members of the Canal Society enjoyed a variety of social functions including talks, walks and weekend trips to other canals and places of interest.

In February 1977 the Canal Society was awarded £35,400 for a 6-month Job Creation Scheme that was managed by former voluntary working party leader Frank Jones.  This was followed by other similar schemes and enabled the 14 Deepcut locks to be restored. Money was needed to pay Frank and the other supervisors and the Canal Society decided that a trip boat would be the ideal way to raise funds and win friends for the canal. The dredger had cleared about 1½ miles of canal from Colt Hill, Odiham to King John’s Castle at North Warnborough, and this trip proved very popular with passengers when the John Pinkerton started operations in May 1978 after an official launching ceremony by Lord Montague of Bealieu. 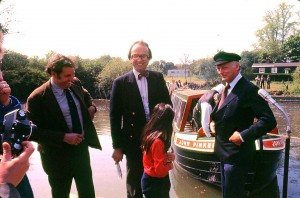 In 1979 a derelict army swimming pool in the beech woods above Lock 28 was converted into a workshop where Frank Jones with work experience recruits and volunteers started to build 114 gates needed for the 28 locks in Surrey and the dry dock. Another 4 gates, for Ash Lock (Lock 29), were made by canal manager Tony Harmsworth and his father (descendents of one-time canal owner Alec Harmsworth) at Ash Vale. The oak used came from Surrey County Council’s timber plantations near Dorking. The nearby dry dock above Lock 28 had been infilled in the 1930s, but was restored for use by September 1983. 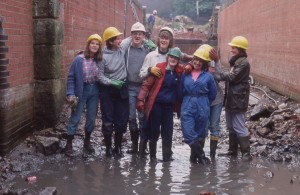 The next decade saw the efforts of the volunteers and the job creation scheme youngsters gradually returning the canal to life. The John Pinkerton was able to navigate the whole of the Hampshire length by March 1984 and reached Woking for the first time in May 1988.

The two County Councils formed the Basingstoke Canal Authority (BCA) in 1989 to manage the whole canal and its headquarters were eventually established in redundant school buildings next to the canal in Mytchett.

In 1990, following the death of Sidney Cooke, the owner of the New Basingstoke Canal Company, Hampshire County Council purchased the remaining western end of the 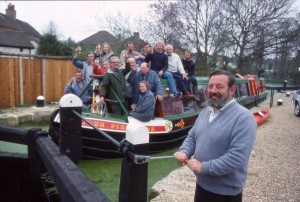 canal from Greywell Tunnel to the site of Penney Bridge for £10,000. 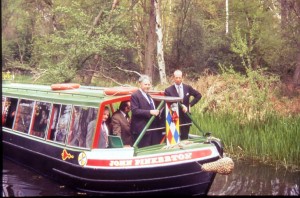 The Basingstoke Canal was officially reopened by HRH The Duke of Kent, accompanied by Society chairman Robin Higgs, at a ceremony at Frimley Lodge Park on 10th May 1991. The following day two convoys of boats set out, one going westwards to the end of the navigation at North Warnborough, and the other, headed by the John Pinkerton, setting off eastwards before dawn, finally reaching the junction with the River Wey at West Byfleet in the late afternoon after a series of civic welcomes.

There was concern that once the canal was open, support for the Canal Society would suddenly drop. Happily this did not happen and it gradually became apparent that volunteer effort on the canal would continue to be needed for the foreseeable future. Initially, this was aimed at doing work to enhance the canal and the Society was instrumental in getting two back-pumping schemes installed to improve the canal’s water supply. New landing stages were installed and considerable lengths of towpath were re-surfaced by volunteers. 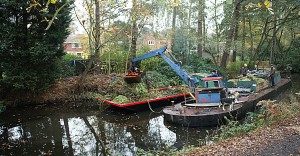 done and volunteers from the Canal Society and elsewhere have done a great deal of work to control the growth of bankside vegetation and overhanging trees. Volunteers have also used a dredger partly owned by a Society member to do spot dredging and remove rubbish and invasive weed from the canal. 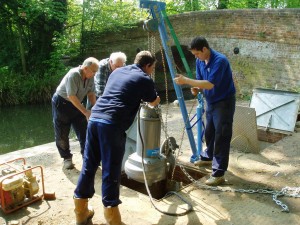 The Canal has also suffered from chronic water shortage particularly in the summer months, not having a summit reservoir to provide a healthy supply. The Society has been instrumental in the design and construction of  two back-pumping (water recycling) projects, to allow more efficient use of water during the dry season. The first, paid for with the aid of a Heritage Lottery Fund grant and completed in 2001, pumps water from below Lock 1 up the Woodham flight to above Lock 6. The second was installed by volunteers in 2006, and pumps water up the next 5 locks to St John’s.

Next: The Society Today >>