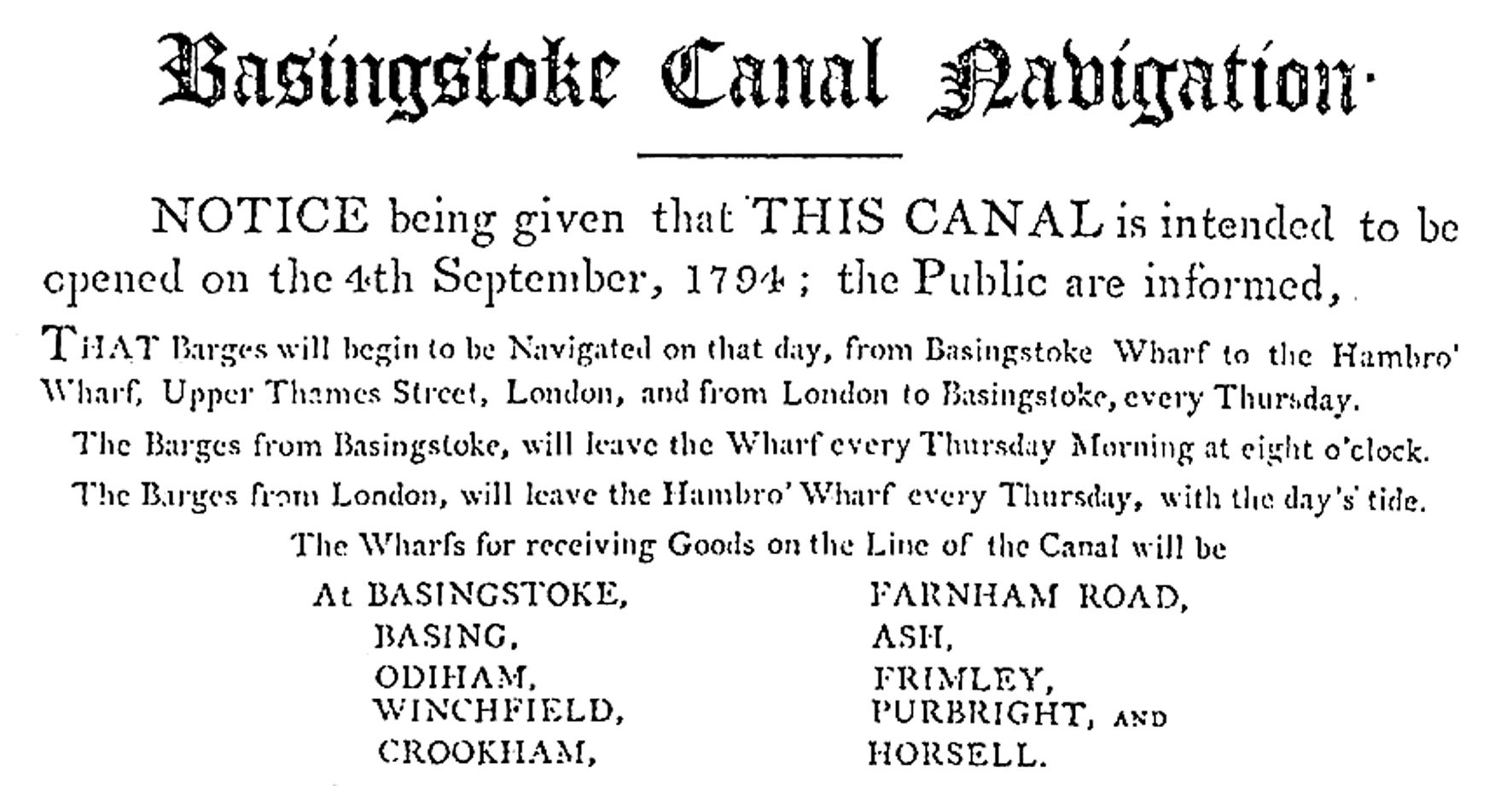 This notice announcing the forthcoming opening of the Basingstoke Canal listed the ten wharves where goods could be loaded and unloaded. One might imagine that they would be equipped with cranes to assist the process, but in fact old photos show little signs of any.

This map of the terminal basin at Basingstoke in 1872 has a letter C next to the canal, which might stand for crane, but the photo below of the wharf dated from about 1860, shows no sign of one: 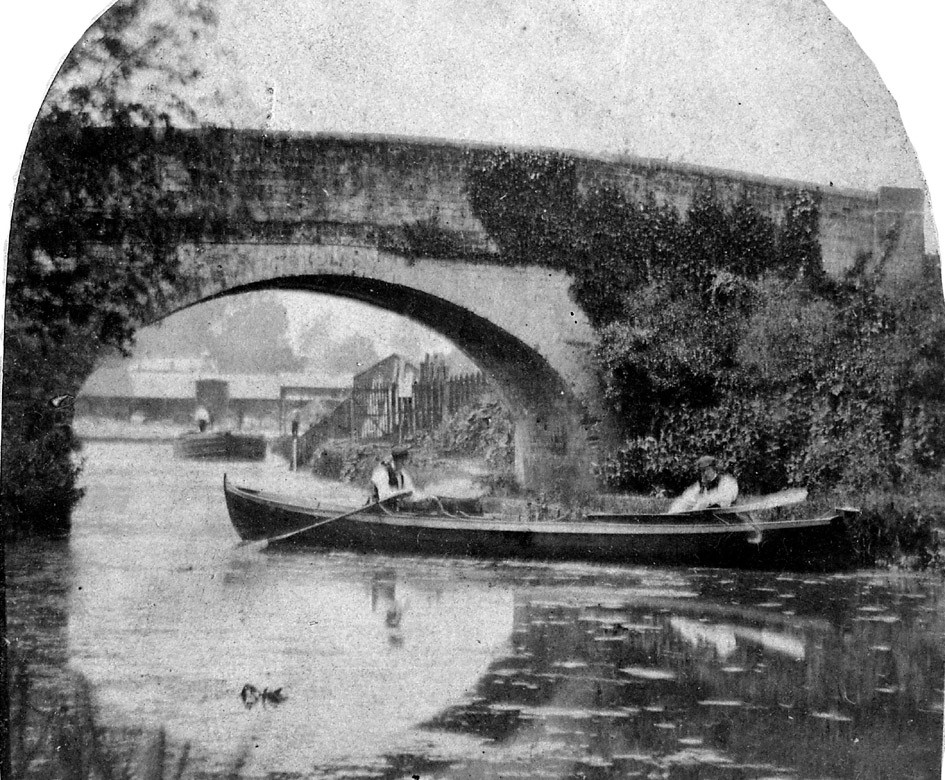 We have no photos of the wharf at Old Basing, but we do have some of the two wharves at Colt Hill, Odiham from around the turn of the 19th/20th century and neither of them appears to have had a crane.

This is the Little Wharf at Colt Hill on the west side of the bridge in 1914, 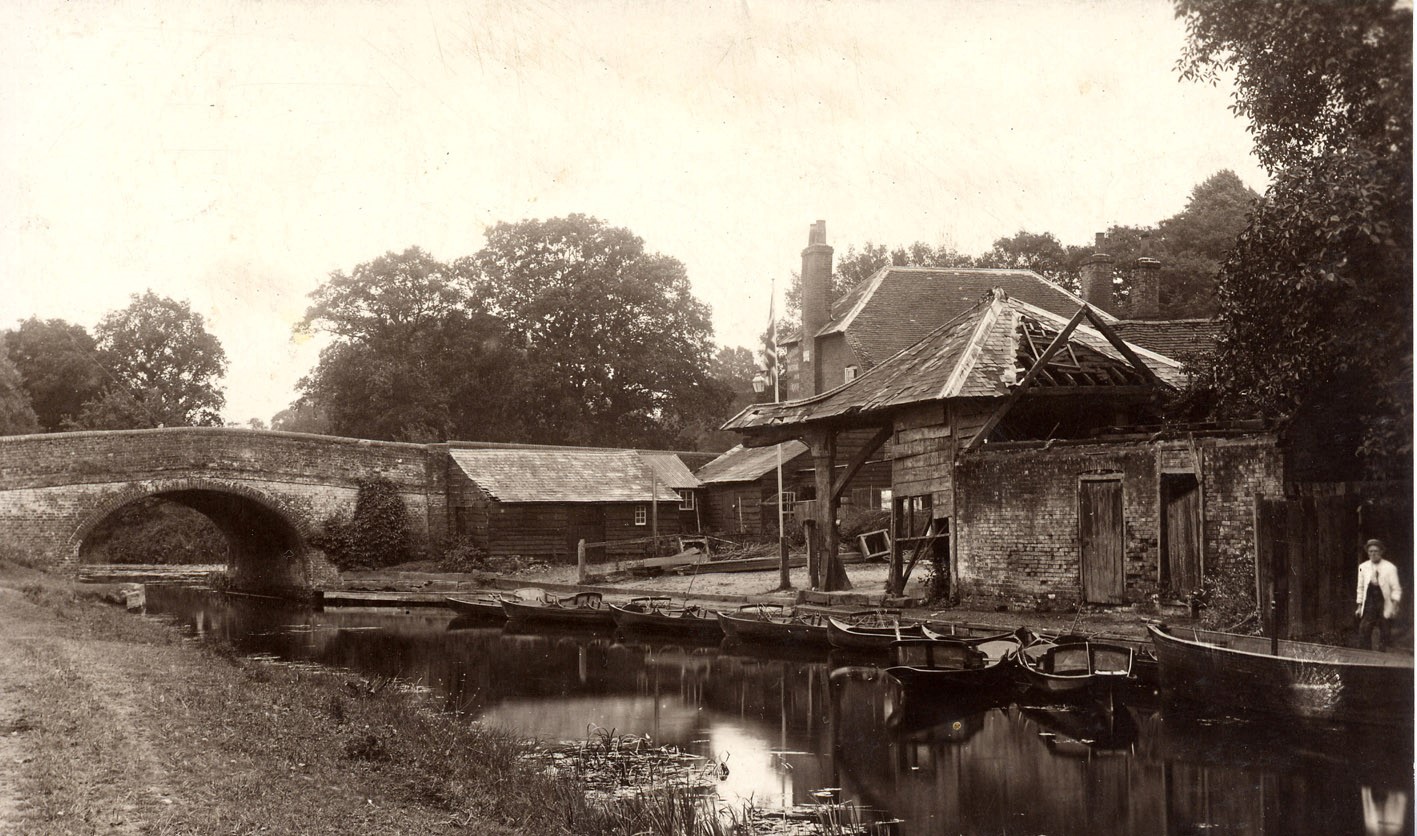 while this is the main wharf to the east of the bridge in 1904. The building in the centre was then the pub, called the Cricketers. 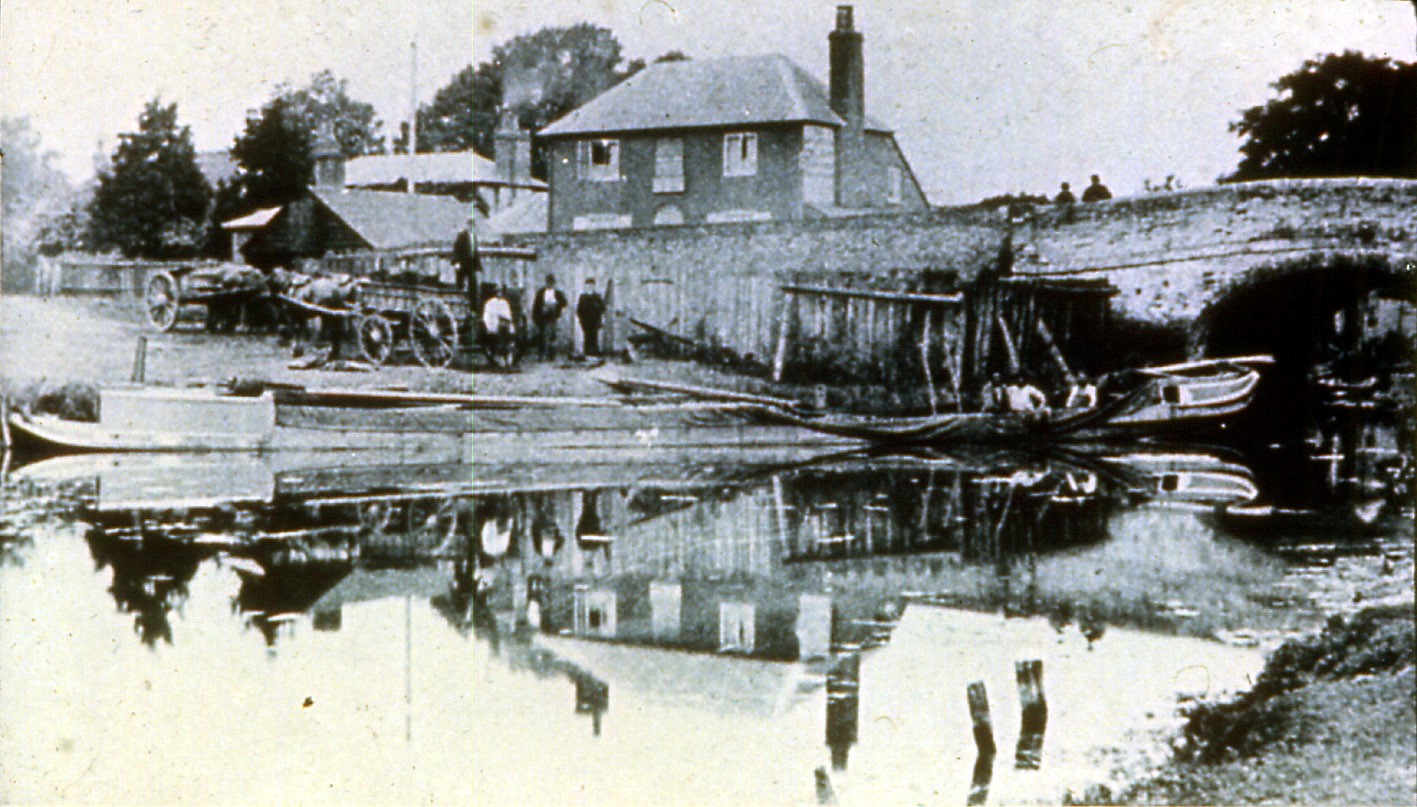 Even Spanton’s massive timber wharf and warehouse in Woking seems to have managed without one as this photo from 1967 shows: 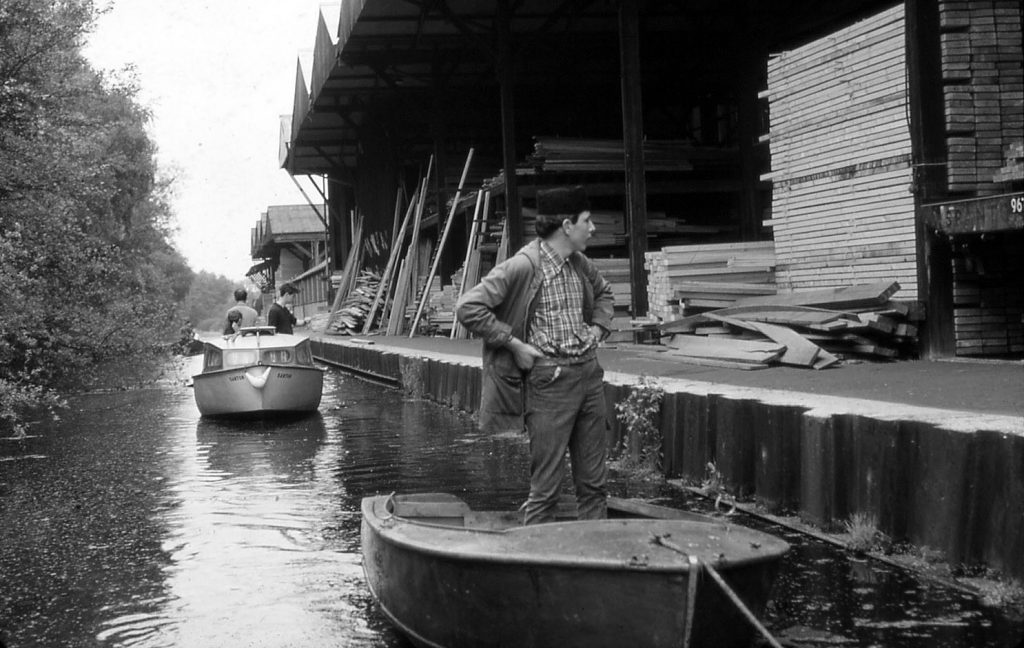 In fact the only working crane that we know of was a very late arrival. According to Tony Harmsworth, whose grandfather owned the canal at the time, in the early 1930’s a contract was secured to deliver coils of wire by barge to a company near Monument Bridge that was producing wire nails. It was a subsidiary of Guest Keen & Nettlefold whose main headquarters were in Birmingham but were looking for a manufacturing facility in the south. To unload the coils of wire from the barges required a crane and a suitable crane was standing disused alongside the military railway sidings at Ash Lock. The crane was dismantled at Ash Lock and taken down to Monument Bridge where it was re-erected and used for a short while to unload coils of wire onto small electric trucks which then ran up the road and into the industrial estate to the factory. Unfortunately, shortly before the Second World War, GKN decided to centralise all nail manufacture in Birmingham and the trade ceased. Only the base and the winding gear of the crane remains as the jib which was wooden rotted away some years ago. 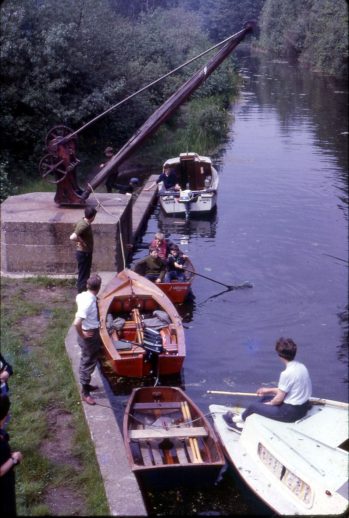 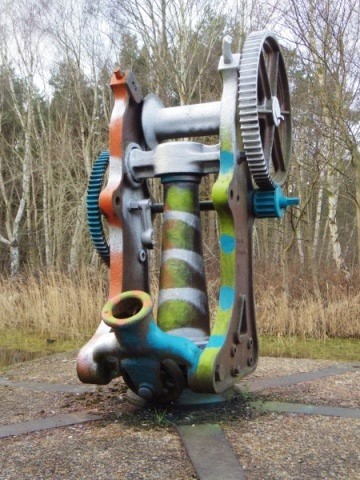 Above left in 1967 and right a few years ago after an inappropriate but not unattractive bit of spray painting.

But what about the crane at Ash Lock? That was salvaged from Lower Heyford on the Oxford Canal and installed by the Canal Society in 1984. It is missing bits, has had no safety testing and the BCA is not keen that it should, so it will remain solely as a decorative feature. 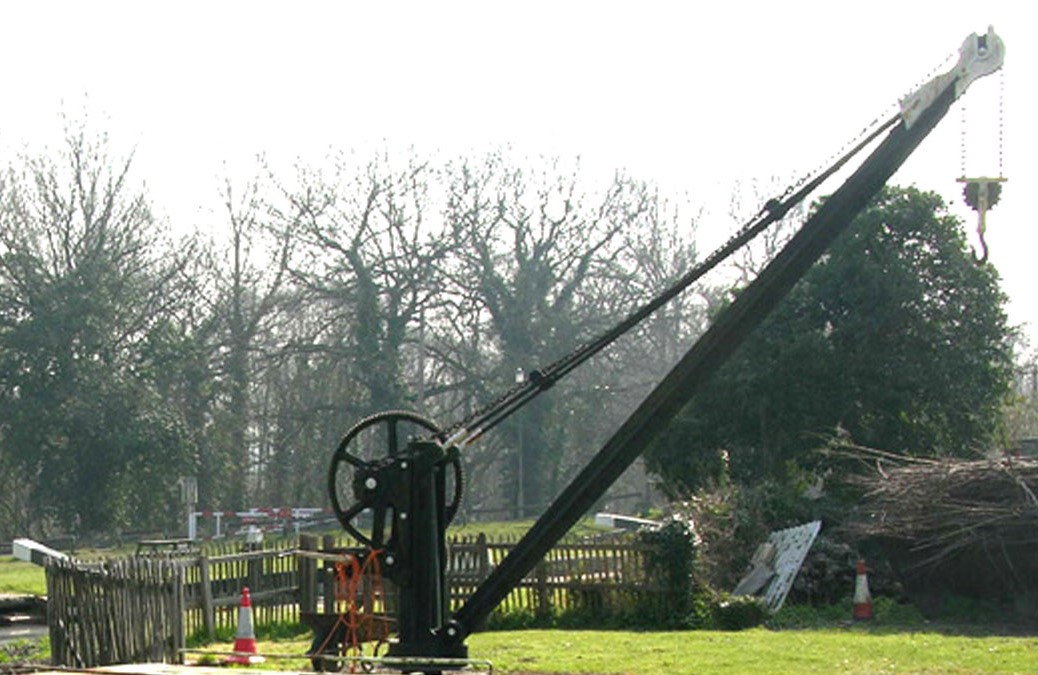