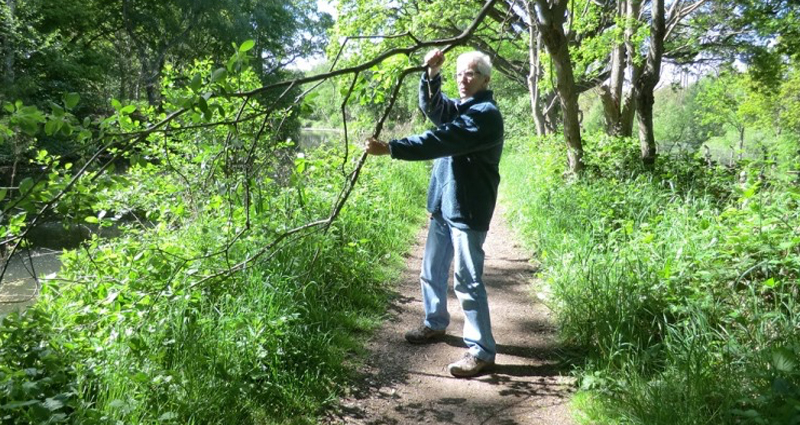 The Basingstoke Canal Lengthsman Scheme is operated by Society volunteers in support of the canal operators, the Basingstoke Canal Authority (BCA).  The idea behind the scheme is that volunteer lengthsmen should walk a given stretch of canal at regular intervals (preferably at least once a week) with a view to reporting any unusual occurrences that they may observe.  By acting as the eyes and ears of the canal and giving early warning of problems to the Lengths Manager, lengthsmen play an essential role in helping to avert disasters, such as the breach of an embankment, and in identifying maintenance requirements, thus ensuring a better service for all canal users.

Although the scheme is designed to operate as a result of regular observation, it would be appreciated if lengthsmen could, in certain circumstances, make a special effort to check conditions on their particular length.  Checks are particularly important following freak weather conditions or very heavy rainfall.  In these circumstances, trees may often be blown down across the canal, water levels may rise suddenly and overtop the banks, weirs or culverts may become clogged with floating debris and there is a generally increased potential for disaster.  Prompt observation and reporting of such problems could well avert more serious problems such as flooding or breaches of an embankment.

It must be remembered that lengthsmen have no legal standing and must therefore be circumspect when approaching members of the public.  Normally, the best course of action is merely to observe and report.  Contact may be necessary in exceptional circumstances in which case the lengthsman must remain calm and polite and avoid an authoritarian approach.

All the time lengthsmen are carrying out lengthmens’ duties for the Society, they will be covered by the Society’s indemnity insurance scheme.

If for any reason lengthsmen have been requested by the BCA to undertake lengthmens’ duties, they will then be covered by the BCA’s insurance scheme, provided that they have registered as lengthsman with the BCA.  For further details on registration, contact the Lengths Manager.

General guidance for lengthsmen is set out in the following paragraphs:

Any apparent or suspected leakage through the bank should be reported as should any attempt to cause deliberate damage e.g. digging out of bank.  This is important at all times to preserve our precious water supply, but particularly careful observation should be made at times of extensive rainfall.  Ring the emergency phone number only if you are seriously worried, otherwise report in the usual way.  A serious worry is where there is a considerable escape of water or potential for this. If you are not sure call the duty ranger for advice.

The management of water levels via the various outlets from the Canal is the responsibility of the BCA rangers. However, any unexpected escape of water observed from weirs and sluices, for example during hot weather when the supply is being conserved, should be immediately reported. It might be that water is being released for a particular reason, but it is as well to make sure.

Fallen trees which block the navigation or towpath must obviously be reported immediately they are observed.  Give details of the size of the tree, its exact location, eg. 100M  west of 36.5km chain post at Malthouse Bridge.

To help with reporting the exact location, the free mobile phone app “what3words” may be used. This pinpoints a location by providing a unique three word reference. Other information that should be reported includes; is it rooted in the offside bank or the towpath edge and is it completely blocking the canal, i.e. can boats pass it or walkers climb over it?  Only call the Emergency Telephone number if the canal is completely blocked for navigation. Otherwise fallen trees should be reported to the Lengths Manager.

With the canal being so wooded, large numbers of branches fall into the canal which, while not causing problems for narrowboats, can constitute a hazard for smaller craft.  Remember that a small branch protruding above the surface hides much more just below the surface.  Please report them as soon as possible.

Please report all dumping of rubbish on the canal estate, including the disposal of garden waste over back fences and onto the canal bank and towpath.  If people are actually seen dumping rubbish, any additional information that can be gleaned, such as their name and address, or the registration number of their car, will be very helpful.

Deliberate pollution of the canal is an offence against the by-laws and should be reported immediately.  A more likely occurrence is pollution caused by surface run-off water which has picked up oil, petrol or other noxious fluids on its journey to the canal.  Pollution will generally become apparent either by smell or discolouration of the water.  Again, early reports are helpful, or report directly to the Environment Agency Hotline on 0800 807060 for serious cases requiring urgent attention.

The canal is extremely prone to vandalism in all its forms, particularly in the more built-up areas, such as graffiti or throwing supermarket trolleys, traffic cones, etc. into the water.  Prompt reports of vandalism will enable the Canal Authority to put right the damage and to preserve the visual attraction of the canal.  It is generally sensible not to remonstrate with vandals, but again any information which may help in their identification will be useful.  However you should not put yourself at risk in the process.

Any incidents of damage to the flora and fauna near the canal should be reported in the usual way. Note that except for a section in Woking, the whole length of the canal between the banks is a Site of Special Scientific Interest (SSSI), and has some protection under general law, therefore any wilful damage to wildlife in the water must be reported at the earliest opportunity.

Rat, crayfish, badger, fox and similar holes in the canal bank can develop in size and lead to leakage and possible breach of an embankment.  These holes should therefore be reported as soon as they are observed through the normal procedure.

There are a number of streams, ditches, etc, which pass beneath the canal through culverts.  Blockage of the culverts can cause flooding, damage to the canal embankment and eventual collapse of the canal bed.  Early reports of any suspected culvert blockage are therefore extremely helpful.  You may be able to unblock the culvert yourself but do not put yourself in danger.

Where new buildings are being built on land adjoining the canal, lengthsmen should keep an eye open for any work which may disturb the canal bank or encroach onto canal side land.

Where trenches for cable, gas and water pipes or drains are dug near the canal there may be damage to the bank or towpath.  In all such cases, the contractor should have the approval of the BCA, but it is always as well to check that the activity has been approved and that permission has been given.

A considerable amount of land has been lost to the canal estate over the years through encroachments which have gone unchallenged.  Lengthsmen are requested to note any alteration to the position of boundary fences adjoining the canal and report immediately the location of any apparent encroachment onto canal land.

Most of the bridges across the canal are the responsibility of adjoining landowners or of the County Highways Departments.  Nevertheless, any apparent damage to or problems with the bridges should be reported to the Canal Authority for onward transmission to the appropriate body.

Lengthsmen have no responsibility for checking boat licences, but if obviously unlicensed boats are observed using the canal, details should be noted and reported, giving the boat’s name and type and a description.

The issue of fishing tickets is controlled by the Basingstoke Canal Angling Association and there is no need to become involved with anglers unless other matters form part of the scenario.  The Anglers Association run their own Water Keepers Scheme for checking tickets and for dealing with other fishing matters. If asked, day tickets can also be purchased from the Canal Centre.

Vehicles should not be parked in such a way that they obstruct other canal users or are detrimental to the canal environment.  Where such parking is observed, please make a note of the registration number and any other details which may be helpful and report them to the BCA.

Motor cycling is not permitted on the towpath, but it is nevertheless a popular pastime.  If you see it, the hints regarding vandalism again apply.  A prompt report and a note of the bike registration number will assist the Canal Authority in taking appropriate action.

Although lengthsmen have no responsibility for litter collection, any lengthsmen volunteering to help keep the canal tidy while doing their rounds will be warmly welcomed and ‘litter pickers’ will be provided on request to the Lengths Manager.  Lengthsmen should take special care with removing used needles etc. Canal rangers can assist in removal of collected litter or dealing with needles. Contact the Lengths Manager.

Some more substantial tasks, such as the removal of branches from the water, may be undertaken by lengthsmen individually or in a small group of, say, neighbouring lengthsmen convened for the purpose.  When reporting items that could be dealt with in this way, please indicate to the Lengths Manager whether you would be prepared to participate in such a group.  The Society has certain equipment such as grappling irons which may be made available for this purpose.  It is important, however, that safety remains paramount and that tasks that are too ambitious are not undertaken by lengthsmen.

Only very urgent matters which require immediate attention should be reported direct to the Duty Ranger on the Emergency Telephone number 07894425588,

Additionally in dire (breach of bank) emergency situations when the duty ranger is not immediately available, you may phone the Emergency Engineers of either

Should you need to contact the emergency numbers, it would be helpful if you could advise the Lengths Manager after you have done so.

For your information, the senior BCA personnel are Fiona Shipp, Canal Manager and Jon Green, Senior Ranger but, as stated above, you are requested not to contact them directly in your role as a lengthsman.

The contents of these notes have been agreed with the BCA.  Please ensure that you follow the reporting procedure set out above, as the prime concern is that, except in emergencies, reporting comes from one source, ie the Lengths Manager.  If you will be unable to patrol your length for an extended period, please advise the Lengths Manager so that temporary cover may be arranged.  Above all, enjoy the canal.