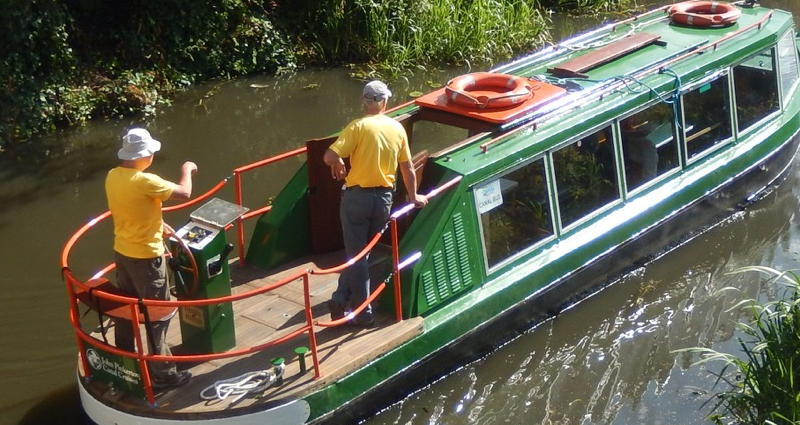 Built in 1987, Kitty started life as a house boat and looked very different from how she looks today.

Kitty, formerly named Egremont was purchased by the Society from the Chichester Canal Trust in 2016.

Kitty underwent refurbishment and was repainted in the John Pinkerton colours in readiness for the Woking Canal Festival in August 2016 where she was first introduced to the public. The Festival provided the opportunity to name Kitty in traditional fashion with a bottle of champagne. The honours were undertaken by the Society Co-President Liz Dodwell.

Internally Kitty is lined with pine cladding. She can accommodate up to 12 people and also has a hydraulic lift, which enables up to two wheelchair users to enjoy the benefits of a trip on the Canal. Tables are available if required.

Kitty was named after a horse of that name that worked on the Canal in the 40s and 50s. Kitty the horse is pictured with the then Canal Manager Joan Marshall.

We need to replace Kitty with an all electric boat are are fundraising hard to raise the £200,000 it will cost.

A canal boat can only go on for so long before repairs become almost impossible to sustain.  Kitty is nearing the end of her life and we plan to replace her with an all-electric boat.

As well as making the new Kitty non-polluting and all-electric, we also plan to install several charging points on the canal in Woking which will represent the first step towards making the canal fully electric for all users.

Better adapted for the Less Abled

The new Kitty will be much better adapted for the less abled, being designed from scratch to allow easier wheelchair access and provide enough space for an on-board toilet.

We need to raise a lot of money!!

Sadly canal boats don’t come cheap!  The boat will be produced by a UK based boatbuilder and together with installing the charging network, we need to raise around £200,000 to replace Kitty.  To prime this, the Basingstoke Canal Society is contributing £70,000 from its own funds and we are aiming to raise the remaining £130,000 from a variety of sources including grants, individual and corporate donations and an art auction in late February at the Lightbox in Woking.

So please help us reach our funding target.  Kitty has a limited life left and if we can’t raise the funds, we’ll lose this valuable community resource.  Find out what we’re doing to raise funds by clicking here.