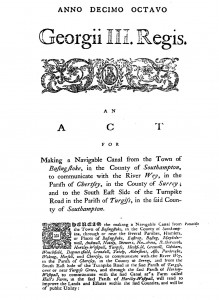 The Basingstoke Canal was conceived as an economical means of transportation for the development of agriculture in central Hampshire. The first route to be surveyed in 1769 was a line northwards to the Thames at Monkey Island, Bray, but the engineering problems proved it would be too costly. In 1776 a 44-mile route eastwards from Basingstoke, to link with the River Wey Navigation and the Thames at Weybridge, was considered.

The route included a loop round Greywell Hill that took the canal up to Rotherwick, with a short arm going to Turgis Green, but this met with opposition from the owner of nearby Tylney Hall. As a result, a decision was made to tunnel through Greywell Hill rather than go round it, and this route, reduced to 37 miles, was approved by an Act of Parliament (right) in 1778.

However work did not commence until nine years later owing to financial restraints as a result of the costly War of American Independence.

To continue reading a more detailed history of the canal, please visit our main website by clicking here.