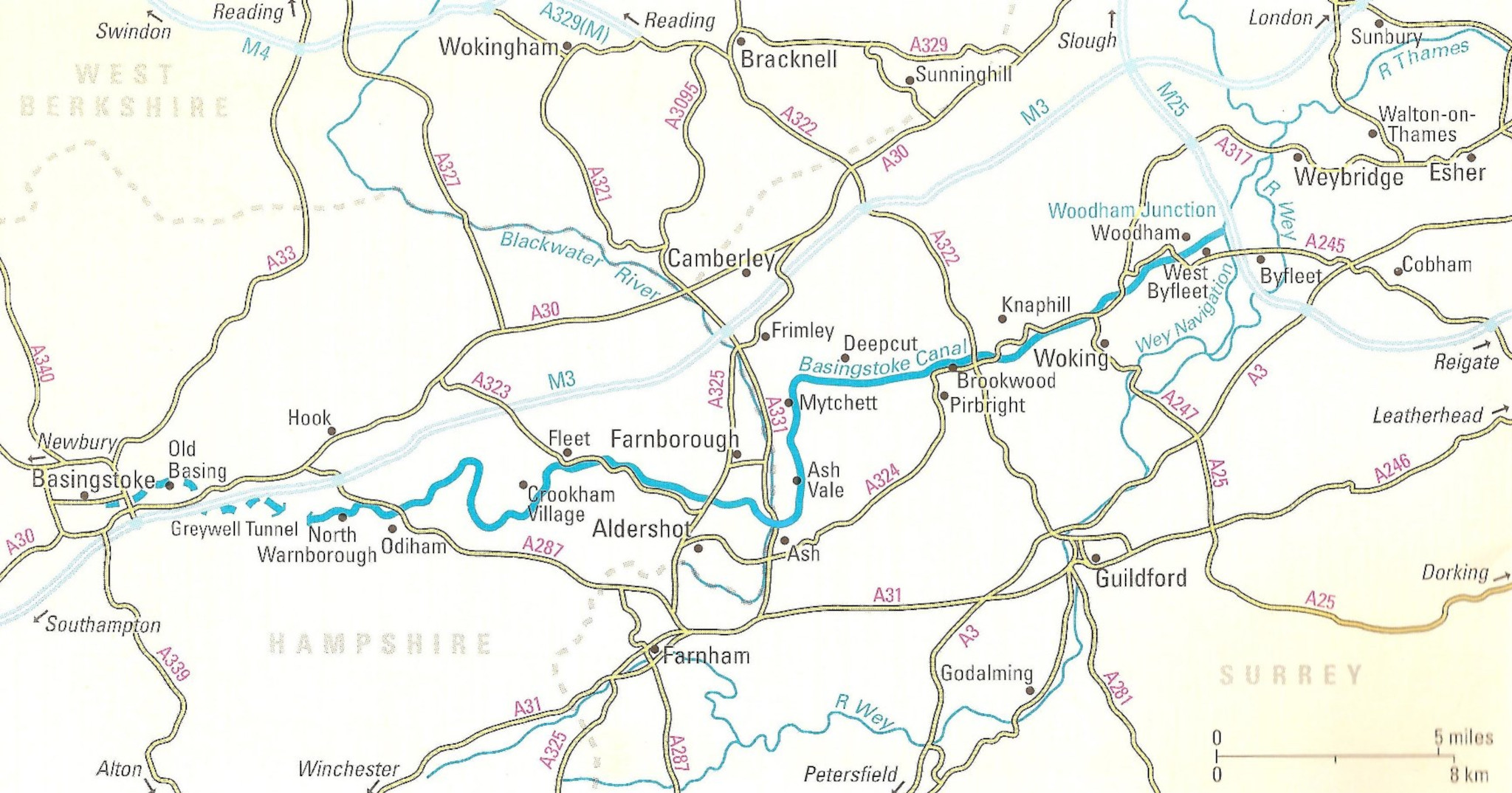 The Basingstoke Canal was conceived as an economical means of transportation for the development of agriculture in central Hampshire. The first route to be surveyed in 1769 was a line northwards to the Thames at Monkey Island, Bray, but the engineering problems proved it would be too costly. In 1776 a 44-mile route eastwards from Basingstoke, to link with the River Wey Navigation and the Thames at Weybridge, was considered. The route included a loop round Greywell Hill that took the canal up to Rotherwick, with a short arm going to Turgis Green, but this met with opposition from the owner of nearby Tylney Hall. As a result, a decision was made to tunnel through Greywell Hill rather than go round it, and this route, reduced to 37 miles, was approved by an Act of Parliament (right) in 1778. However work did not commence until nine years later owing to financial restraints as a result of the costly War of American Independence.

Surveyed by William Jessop, the construction contract was awarded to John Pinkerton. From its junction with the River Wey Navigation at Byfleet, three miles from the Thames at Weybridge, the canal was built to rise 195ft by 29 locks to Aldershot. The mile-long cutting at Deepcut, the 1,000-yard long Ash Embankment crossing the Blackwater Valley on the Surrey/Hampshire border, and Greywell Tunnel, 1,230 yards long, are the major engineering features.

Timber, flour and chalk were the principal cargoes to London. Barges returned with coal and fertiliser. But the canal did not prove to be a profitable venture; tonnages were below expectations, inflation led to rising costs, and road improvements from 1750 onward made overland transport increasingly competitive.

There were plans to extend the canal to Portsmouth, Southampton and westward to Bristol via the Kennet & Avon Canal opened in 1810. None of the schemes for links to other waterways materialised, but local developments kept the canal in use. The construction of the London and Southampton Railway in the 1830s, followed by Aldershot Camp in 1854 and the short-lived brickworks at Up Nateley in the 1890s for which the canal was restored and deepened, all brought periodic trade.

However by 1866 no dividends had been paid to the shareholders and the original canal company was bankrupt, 72 years after the navigation was fully opened. The canal subsequently survived – if not thrived – on a succession of what have been charitably described as speculative owners. In reality, some of these were fraudulently selling shares in a venture that they knew to be virtually worthless, and three of them ended up in prison.

The last boat reached Basingstoke in 1910, bringing 10 tons of moulding sand from Mytchett for the local agricultural engineers, Wallis & Steevens.

Three years later, another attempt was made to reach the terminus in order to stave off a potential abandonment order under the terms of the 1888 Railway and Canal Traffic Act. A.J.Harmsworth, who then ran the only carrying business on the canal, set off from Ash Wharf on 16th November 1913 with a token cargo of 5 tons of sand.

Over 3 weeks later the boat had only succeeded in reaching Old Basing.  However, a High Court case between Woking Council and the canal’s owners over the cost o/f bridge repairs decided that when the canal had first gone into liquidation in 1866, the liquidator had sold it without the benefit of an enabling Act of Parliament to transfer the Statutory Undertaking to the new owners. As a consequence, the canal was judged to be private property and therefore not subject to the Railway & Canal Traffic Act, so the threat of forced abandonment paradoxically disappeared.

The canal was taken over by the Army at the beginning of the First World War and run by the Royal Engineers using German prisoners of war as part of the labour force. The last cargoes from Aldershot were 22 barge loads of aircraft spares from the Royal Aircraft Factory at Farnborough destined for Woolwich Arsenal in 1921.

The most stable commercial period was under the ownership of A.J.Harmsworth. He bought the canal for £5,000 in 1923 and secured contracts carrying coal and timber to Woking. However, his grandson, Tony, who himself became the Canal Manager in the 1990s, believed that his grandfather probably made more money from hiring out skiffs and punts and canoes than from his carrying business.

Alec Harmsworth died in 1947 and the canal was sold at auction two years later for £6,000 to a Purchase Committee convened by the newly formed Inland Waterways Association (IWA); the Committee’s secretary was Mrs Joan Marshall. However, legal problems appear to have arisen over raising the money to complete the purchase and Mr S E Cooke, a local businessman, agreed to put up the money.

Sidney Cooke formed the New Basingstoke Canal Co Ltd in 1950, and appointed Mrs Marshall as the canal’s General Manager. She ran it for the next 15 years with the aid of about a dozen paid employees and a large number of volunteer bailiffs. The canal’s only real source of income was a contract to supply water to the National Gas Turbine Establishment at Pyestock but this ended in 1964. In spite of efforts to keep it navigable, insufficient maintenance coupled with increasing vandalism, not least by the army who blew up the gates of Lock 22, took their toll and by the mid-1960s the locks were decaying, the channel was silted up and choked by weed and rubbish and much of the towpath had become overgrown.